Today, I am giving an abbreviated report.

Big picture: We are well into the fall surge in COVID-19 Cases.  I do not know how bad it will get, but it is getting worse.

Local: The caseload in Vienna doubled in the last month, but leveled off.  Because the case numbers are low, random variations can make it more difficult to assess the trends.  But they are increasing.  Elsewhere in NOVA, cases are increasing with a doubling rate of about 45 days.

Yesterday, VA reported 1,161 new cases of COVID. The data were reported by VDH on Nov 15, 2020 slightly below the three-week bias-adjusted average of 1,211 cases.

Viewed over the last seven days, VA reported 9,785 cases, or 1,398 cases per day, which works out to 16.7 cases/100K people. This is highest weekly number confirmed cases during the pandemic, though it is likely the May numbers were significantly under-reported by a factor of four. The best way to demonstrate that is through hospitalizations which peaked at 1,600 in early May but are currently at 1285 (but increasing rapidly).  Since hospitalizations should not be impacted by testing levels that provides a strong indication that the caseload was probably higher in May, but underreported.

The trends over the last three weeks now are showing a minimal increase at 1.20% per day or 9% per week.

By combining our current regional trends with the typical reporting for the day of the week, I expect about 1,115 cases tomorrow (Monday) with a 90% chance of the numbers falling between 981 to 1399  cases. If tomorrow's numbers differ from that, we will have a very rare event. This is useful to consider if I am unable to report tomorrow since you can compare the state reported numbers with this.

The testing numbers now show the percent positive to be above the the 5% metric over the last week (7.0%) which is often used to indicate sufficient testing. This is concerning because, as the percent positive increases, it is possible that some cases are being missed as the number of positives is constrained by the testing availability.  VA is testing about 2.8% of the population every two weeks .

When we look at the local ZIP code data, we see that the observed increases are almost universal across VA. I am comparing the current estimated % positive to that of one month ago. Note that almost all is a warmer color (further from blue and closer to yellow). This is an indication of the uniformity of the increase. As a practical matter, it means to be safe and careful, no matter where in VA you live, there is risk, and it is increasing. 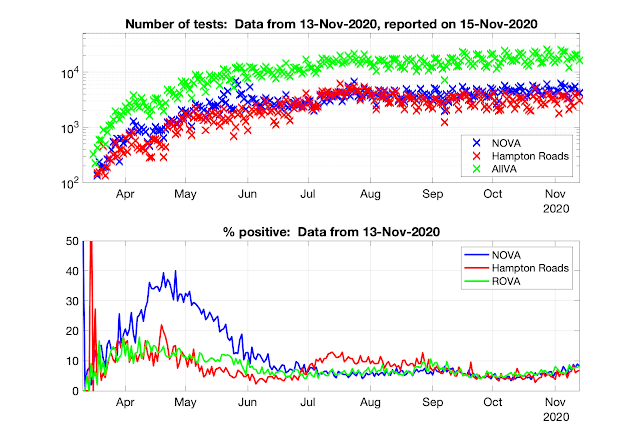 In the spring, COVID-19 in VA was primarily a concern in the DC suburbs. Over three to four weeks, (from late May to early June), NOVA recovered and for about a month the disease was under control to the point that restrictions were eased. Unfortunately, in eastern VA/Hampton Roads, the easing of restrictions resulted in a surge in cases which peaked just before August 1st resulting in stricter restrictions in that area. Since then, with the exception of growth on college campuses, the disease has been stable, excluding the rural parts of the state where safeguards (social distancing and masks) are largely ignored. Starting in October our weekly case count has been increasing throughout the Commonwealth, particularly in NOVA and SWVA. One positive trend is that, is the caseload in SWVA seems to have peaked. 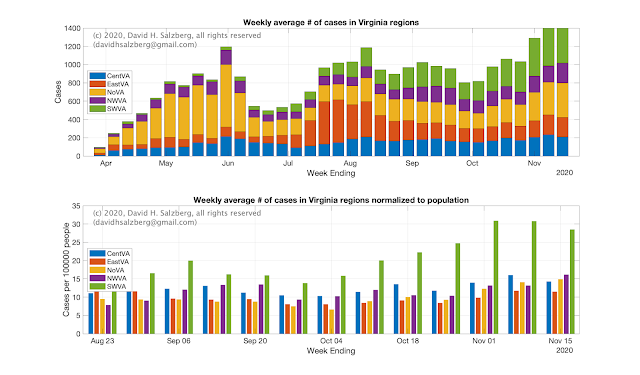 The different regions within the state continue to track one and other. 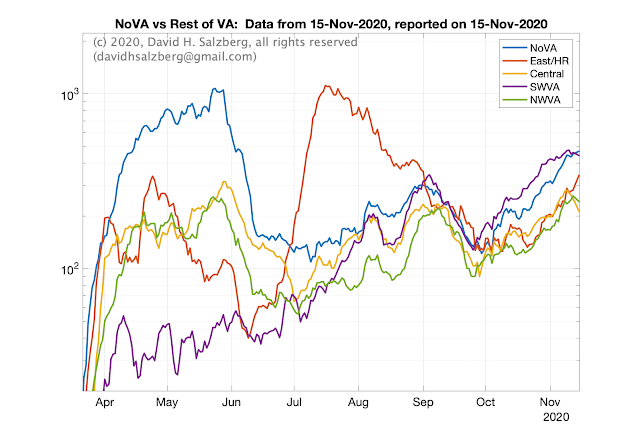 Northern Virginia continues to see an increase in case count., with the count doubling in the last month. This is apparent throughout the region in every local jurisdiction.  This is the time to be extra careful. 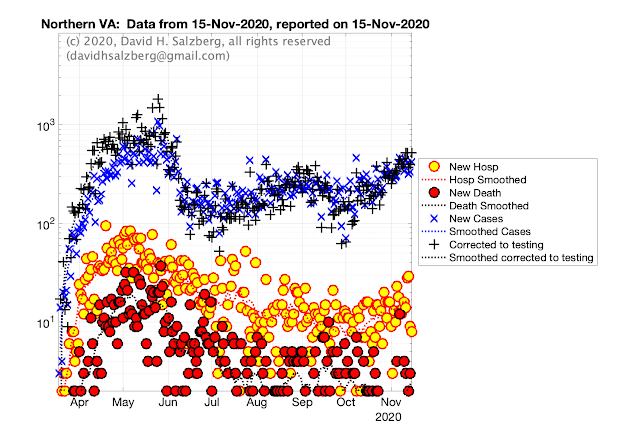 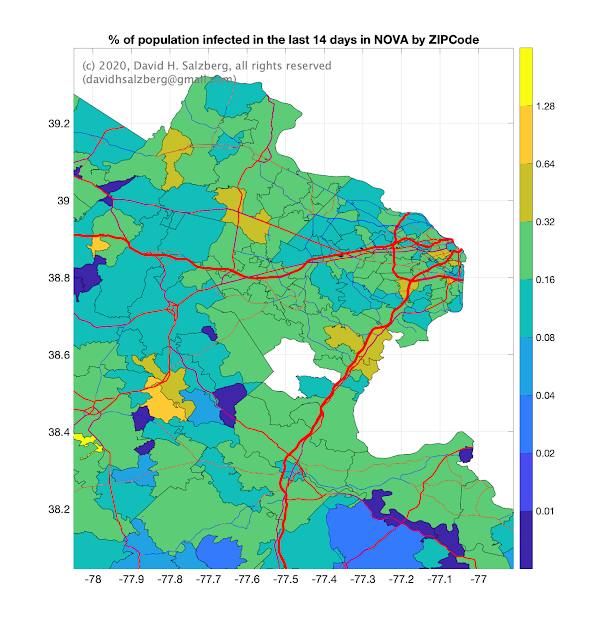 The trends in Northern VA show every group/local is increasing, with caseloads doubling since September. 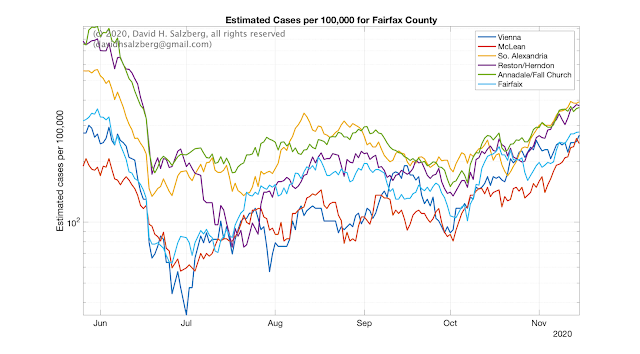 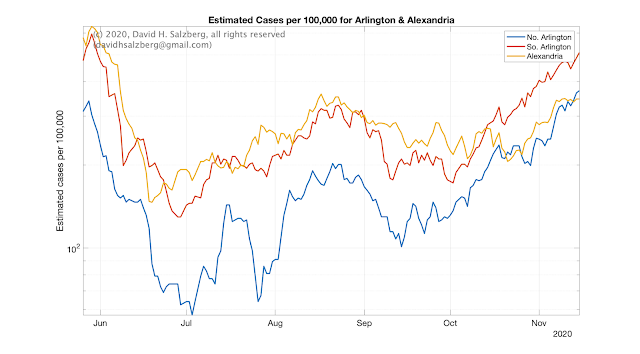 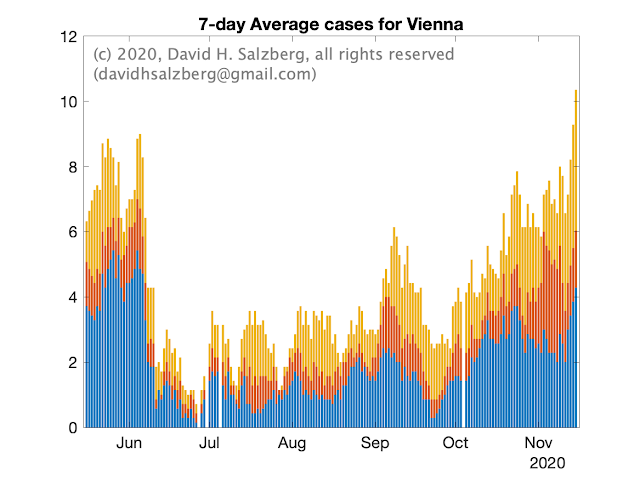 The only bright spot is colleges, which are down significantly since the early semester outbreaks at JMU, Radford, and Va Tech. 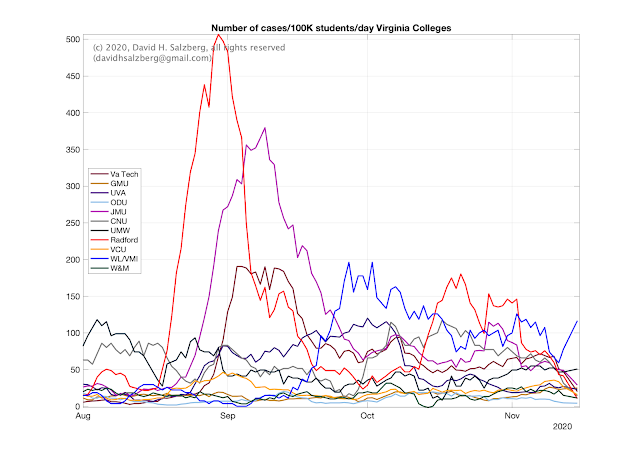