Daily Status, Dec 4: Numbers are impacted by lower testing...low confidence in the trends

Today is an abbreviated update

The data are impacted thanks to the Thanksgiving holiday.

Big picture: At the moment, I think there is an issue with the data caused by the Thanksgiving holiday.  I suspect it is fewer people were tested – at least those that were light in symptoms.  As a result, the number of tests is down by about 30-40% this week compared to prior weeks, and the percent of tests that are positive is up to about 10%.  This means that some of the positives are probably being missed.  It also means the trends are not being captured properly.  As such, I am not doing a full update.   Note that VHD is not reporting any issues.

Yesterday, VA reported 2,877 new cases of COVID-19.  Our fall surge remains paused, but I am confident this is more a factor of testing rather than caseloads. Today’s count is slightly above the three-week bias-adjusted average of 2,452 cases.

The current weekly total of 16,936 new cases, or 2,419 cases per day, which works out to 29.0 cases/day/100K people. This number is about the same as last week. But the hospitalizations are at an all time high, suggesting that the decrease is more a reduction of mild cases not being tested than an actual drop in case infected people.  We are now above early May peak(currently 1869; peak was 1727).  Since hospitalizations should not be impacted by testing levels that provides a strong indication that the caseload is now probably similar to that in May.  Though, in May, the cases were concentrated in in NOVA, whereas now, the distribution is more uniform throughout the Commonwealth.  If we look at hospitalizations, we had 2x the number of hospitalizations in May in NOVA than we do today.

The trends over the last three weeks now are showing an increase at 2% per day or 14.5% per week.

The testing numbers now show the percent positive to be about 2x the 5% metric over the last week (10%) which is often used to indicate sufficient testing. This is concerning because, as the percent positive increases, it is possible that some cases are being missed as the number of positives is constrained by the testing availability.  VA is tested about 1.8% of of the population in the last week, down from 2.9% in the prior week.  Factoring in the test rates and the percent positive, it would not surprise me to find out we are missing between 50%  & 80% of the case

Again, though, the number one takeaway is the lack of testing and the percent positive means we are probably not getting a complete picture of pandemic. 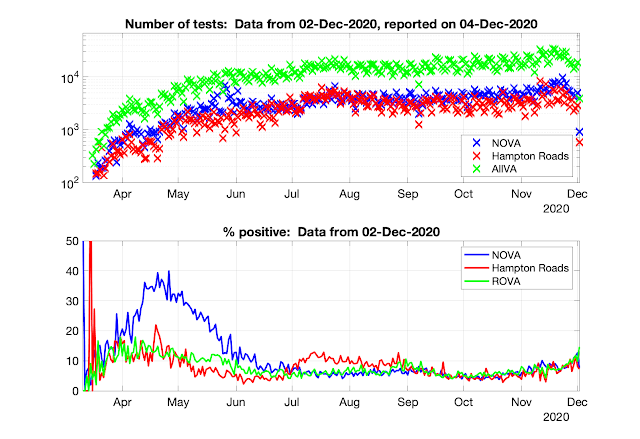 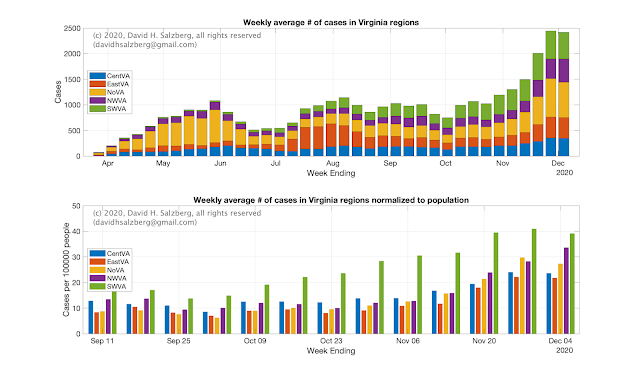 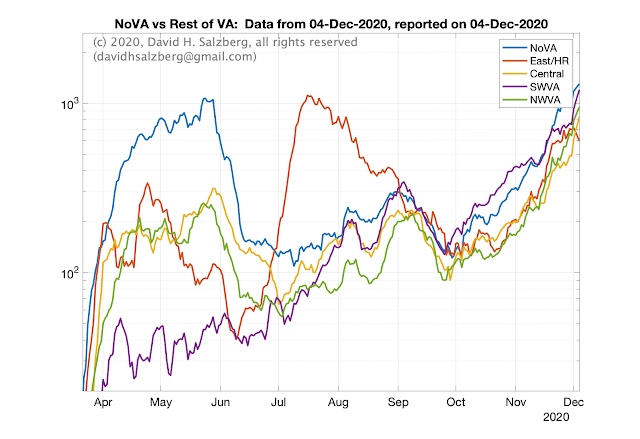