Today is a full update

The data are impacted thanks to the Thanksgiving holiday.

Big picture: There is an apparent pause in the case growth.  This is probably a direct result of fewer test results being reported during the 4 days before the weekend compared with the 4 day weekend (2776/day vs 2234/day). This is probably a result of statistically fewer tests conducted over the holiday weekend.  In all probability we will not return to background activity for several days.  Expectations are holiday travel and gathering will result in an increase in cases though we will not know for certain until around 12/10.

Yesterday, VA reported 2,228 new cases of COVID-19.  Our fall surge has paused for at least one week, but I expect this is more a result of reduced holiday testing than case reduction.  If that is the case, numbers will surge in the next several days (such a possible surge is not factored in my numeric estimates). Today’s count is in line with the  three-week bias-adjusted average of 2,317 cases.

The current weekly total of 16,481 new cases, or 2,354 cases per day, which works out to 28.2 cases/day/100K people. This number is down slightly from last week. But the hospitalizations are at an all time high, suggesting that the decrease is more a reduction of mild cases not being tested than an actual drop in case infected people.  We are now above early May peak(currently 1569; peak was 1727).  Since hospitalizations should not be impacted by testing levels that provides a strong indication that the caseload is now probably similar to that in May.  Though, in May, the cases were concentrated in in NOVA, whereas now, the distribution is more uniform throughout the Commonwealth.  If we look at hospitalizations, we had 2x the number of hospitalizations in May in NOVA than we do today.

The trends over the last three weeks now are showing an increase at 2.7% per day or 20% per week.

By combining our current regional trends with the typical reporting for the day of the week, I expect about 2,549 cases tomorrow (Friday) with a 90% chance of the numbers falling between 1,874 to 3,470 cases.

The testing numbers now show the percent positive to be above the 5% metric over the last week (8.36%) which is often used to indicate sufficient testing. This is concerning because, as the percent positive increases, it is possible that some cases are being missed as the number of positives is constrained by the testing availability.  VA is tested about 1.8% of of the population in the last week, down from 2.9% in the prior week, suggesting we are missing several hundred cases per day.

When we look at the local ZIP code data, we see that the observed increases are almost universal across VA. I am comparing the current estimated % positive to that of one month ago. Note that almost all is a warmer color (further from blue and closer to yellow). This is an indication of the uniformity of the increase. As a practical matter, it means to be safe and careful, no matter where in VA you live, there is 2-3x the risk as there was around 10/1. 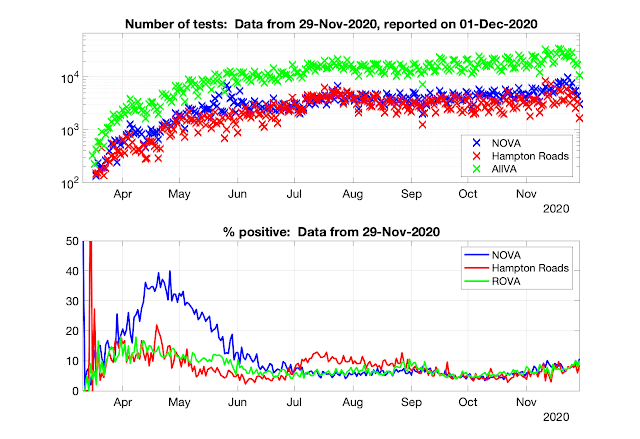 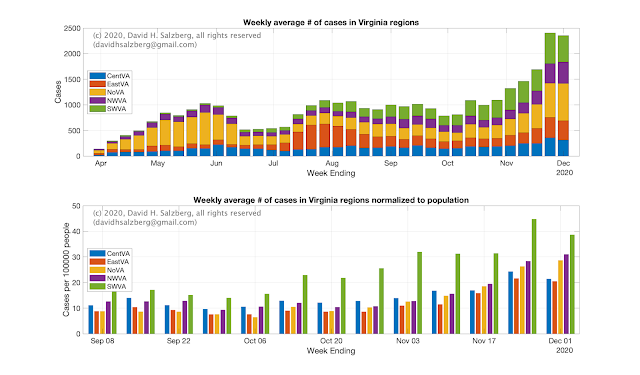 The entire state is increasing with Rt=1.027 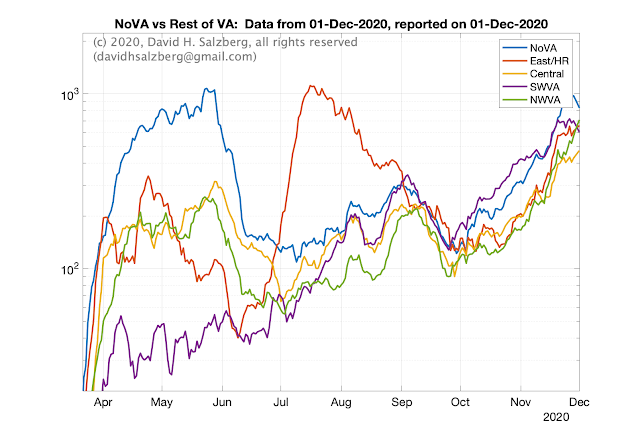 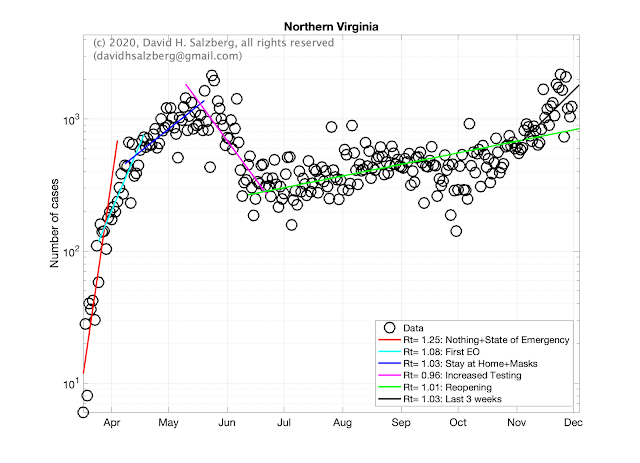 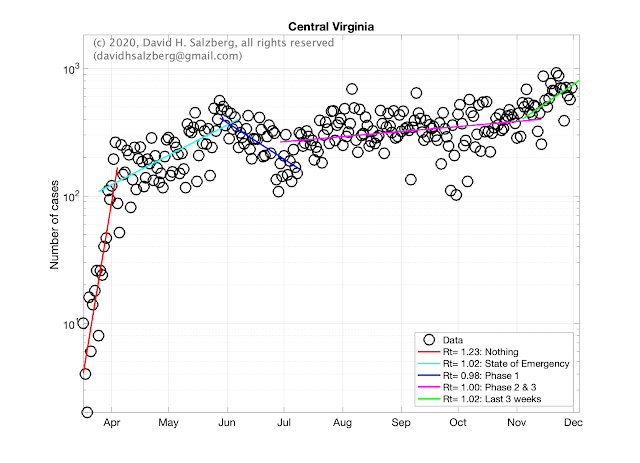 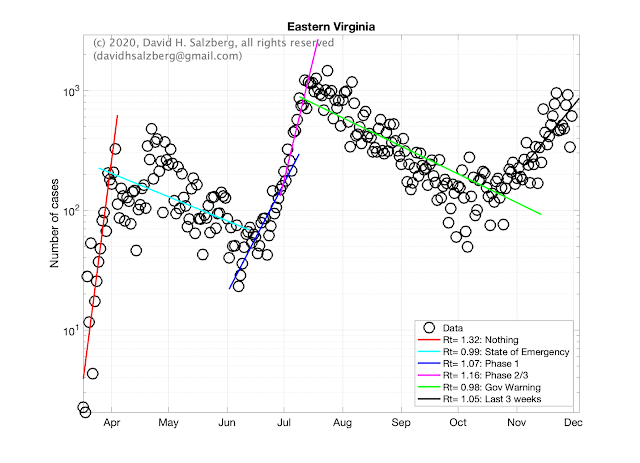 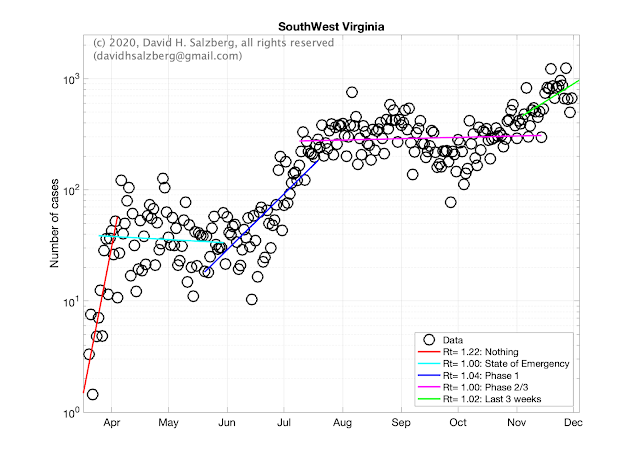 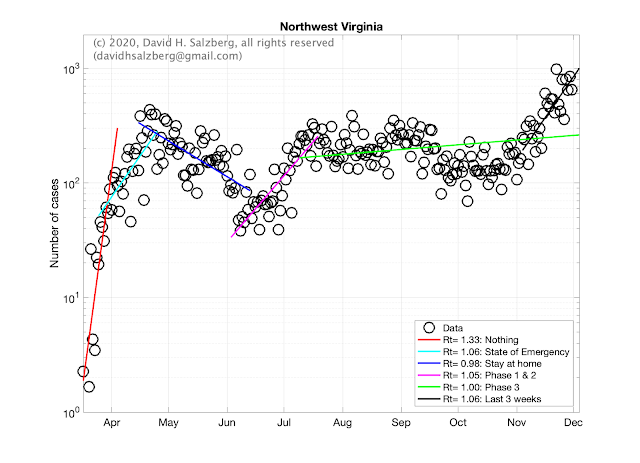 After the early peak in May (~1,000 cases per day), NOVA saw a sharp drop in all COVID metrics, reaching a broad valley in mid-June (~200 cases/day), which lasted until around August 1st.  By Sept 1, NOVA increased to 300 but the caseload dropped to about 150 by late in the month. Since then we have had a steady increase averaging up to a current value of 725/day per day. 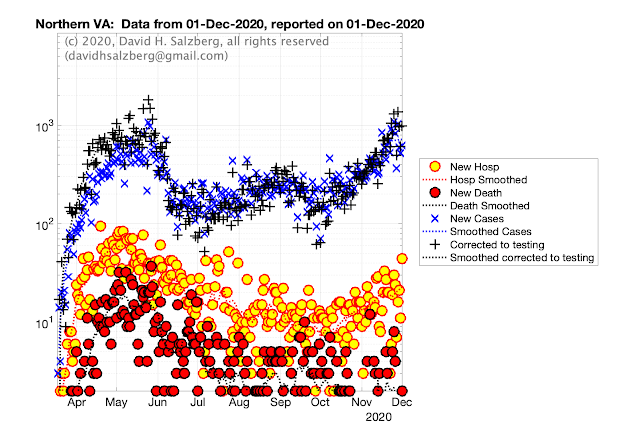 Another way to look at it, todays number are approximately the growth rate times yesterday's numbers.  This is the exponential time constant.  with constants above 1 and  case counts 20/100,000 per day, we are teetering on being really bad.  Ideally, we would be 0, we are still better than our early May peak was around 30/100000K; we should exceed this within a month.

The difference in the colors (contrast) in the NOVA map is increasing. In addition, the NOVA map is warming (as is happening throughout the Commonwealth). We had been in the blues to greens, now we are in the greens to yellows. At this point, it seems likely that this is related to the fall surge others had predicted. 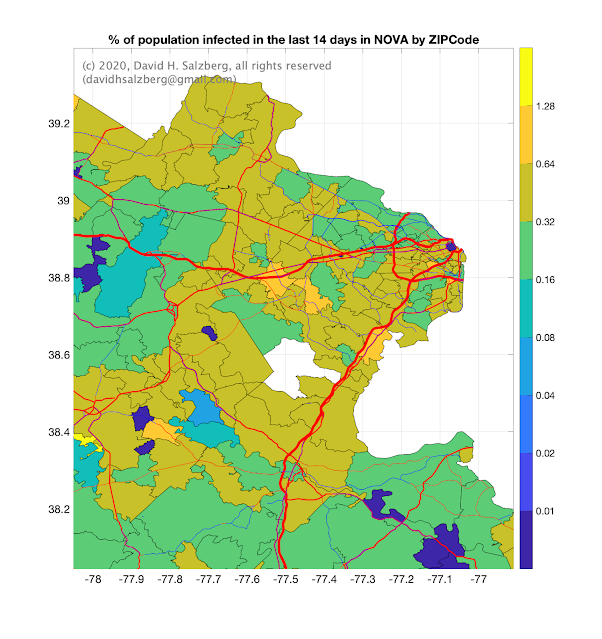 Most localities in NOVA have case counts near or above 10/100K/day.  In Vienna, for example, we were under five in late September but are now at 22.2/100K/day. 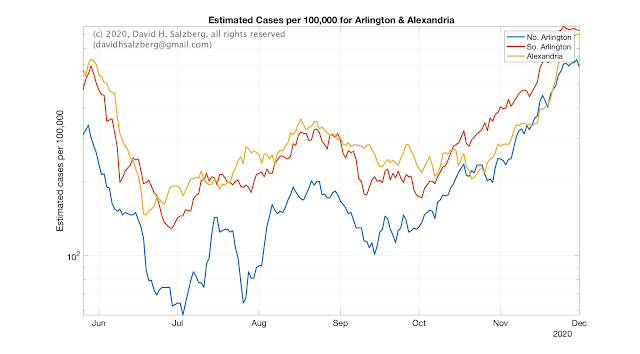 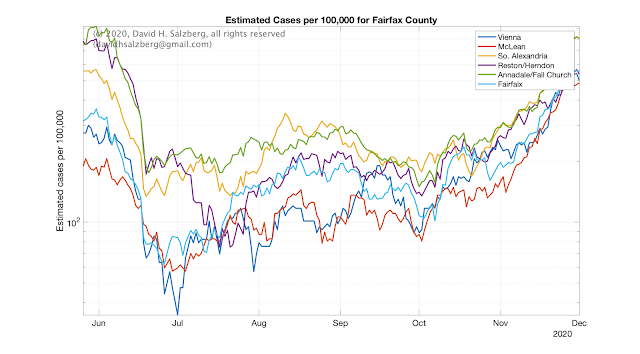 In Vienna, the average daily case count has doubled; I do not why (I have not been out and about). However, I suspect the cause is primarily people locally and state wide tiring of the pandemic. 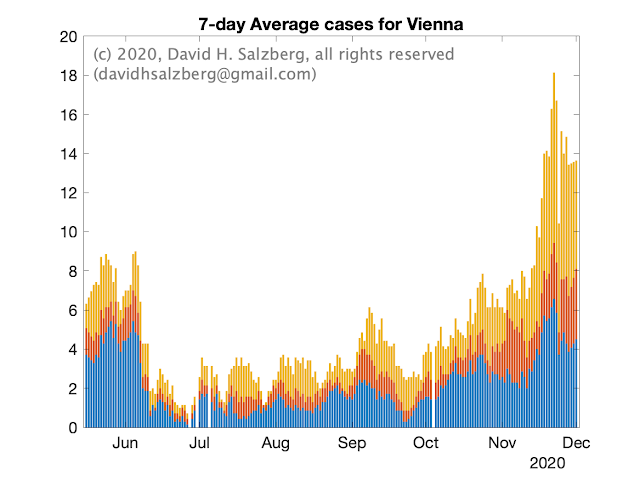 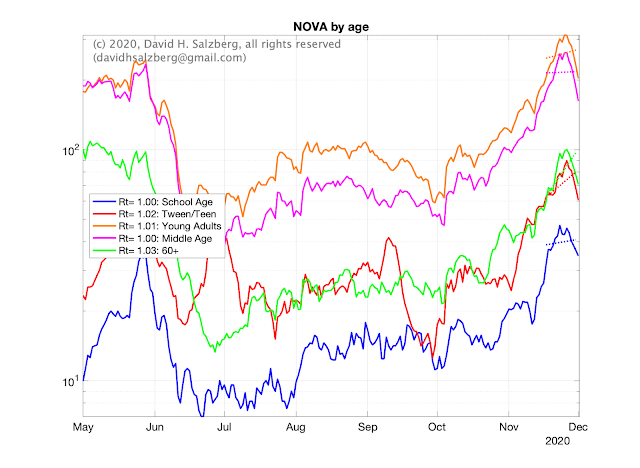 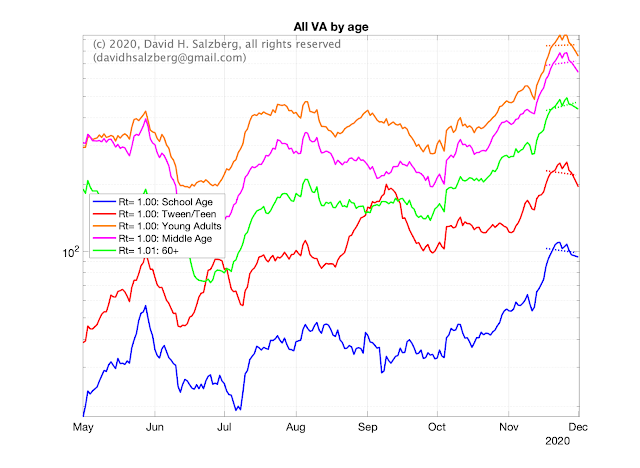