Big picture: Throughout the Commonwealth of VA, we remain close to our peak values with a reported caseload from yesterday being the second highest on record; the top three caseloads are the last three days.  Fortunately, yesterday’s surge in hospitalizations did not carry over to today, and I suspect yesterdays was data glitch.  Week over week numbers, are up.  The only indicator that is not negative is now the percent of COVID tests coming back positive has decreased to 13.0, suggesting that fewer cases are being missed.  While it is possible that some of the case increase is the result of the testing of college students prior to arrival back on campus, that seems unlikely because the total number of college students in Virginia (~420,000), assuming ½ the college students are tested, 210,000 tests would have been initiated, and using current infection rates, we would expect 1,000 infected students at most.  Instead, over the last three days, we have seen 6000 extra cases.  Instead, I suspect we are seeing the impact of holiday (Christmas) travel plans.  For now, hunkering down is the advice of the day.  This is a high-risk time period.  The good news is the vaccine is present, which (with a little luck), will mark the end of the pandemic (once complete).

Yesterday, VA recorded the second-highest number of  new cases of COVID-19 with 7,245 new cases – by far the largest total for a Monday.  Today’s count close to 1.85 standard-deviations above the three-week bias-adjusted average of 4,573 cases.  This is the third day in a row with a multiple standard deviations above the mean. event statistically; given we are only 300 or so days into Virginia and the pandemic, that suggests this is not a random event, but rather a change in the underlying basis.

The current weekly total of 43,164 new cases, or 6,166 cases per day, which works out to 73.85 cases/day/100K people. This is the highest 7-day average we have seen to date.  The hospitalizations are are back down to  more reasonable number (3150) and from yesterday’s (probably anamolous) all-time high (4100). We continue to have capacity for 3000 more COVID cases in Virginia Hospitals, or about double the current numbers of COVID patients, and we will not exceed that for at least a month at current growth rates.

The trends over the last three weeks now are showing an increase at 2.8% per day or 21.3% per week.

The testing numbers now show the percent positive to be about 3x the 5% metric over the last week (% positi at 13.0%).  The 5% metric is often used to indicate sufficient testing. This is concerning because, as the percent positive increases, it is possible that some cases are being missed as the number of positives is constrained by the testing availability.  VA is tested about 2.2% of the population in the last week, down from 2.9% in the week prior to thanksgiving.  Factoring in the test rates and the percent positive, it would not surprise me to find out we are missing between 50% & 80% of the case 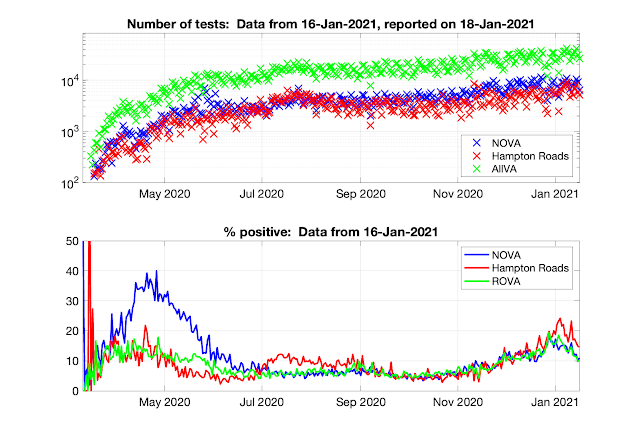 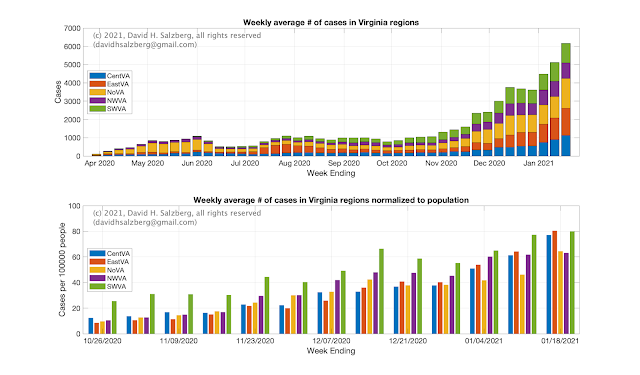 The entire state is increasing with Rt=1.028. 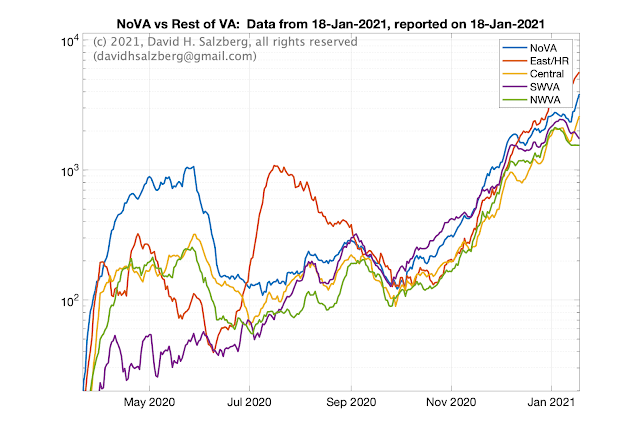 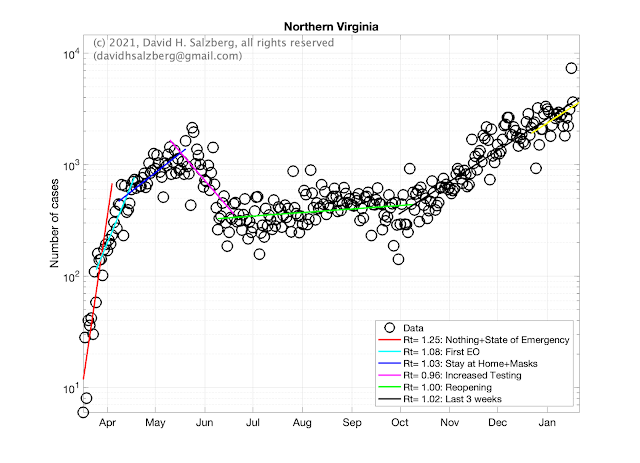 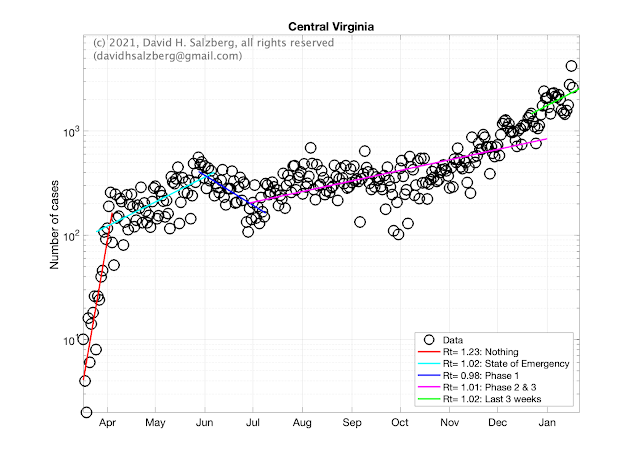 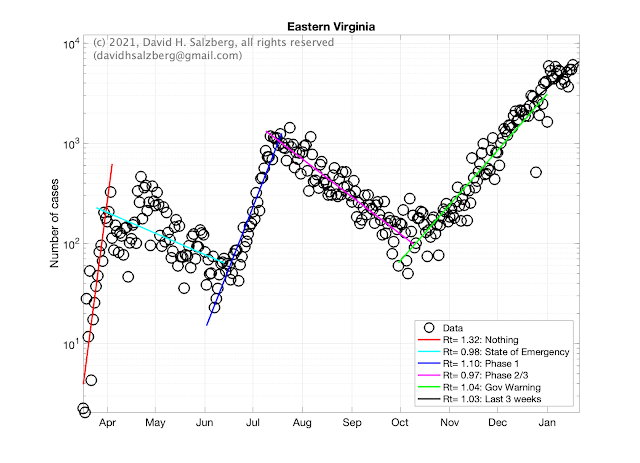 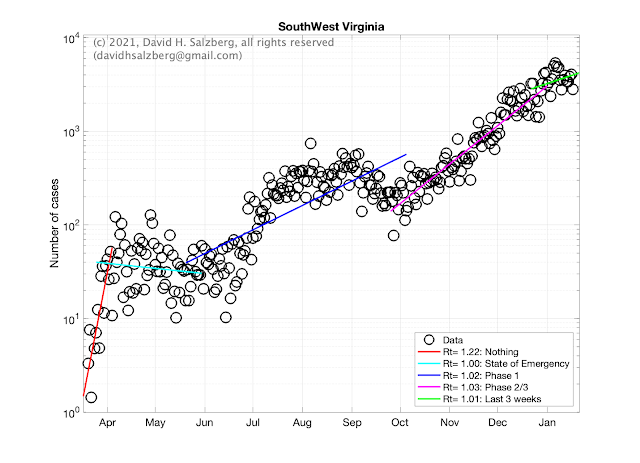 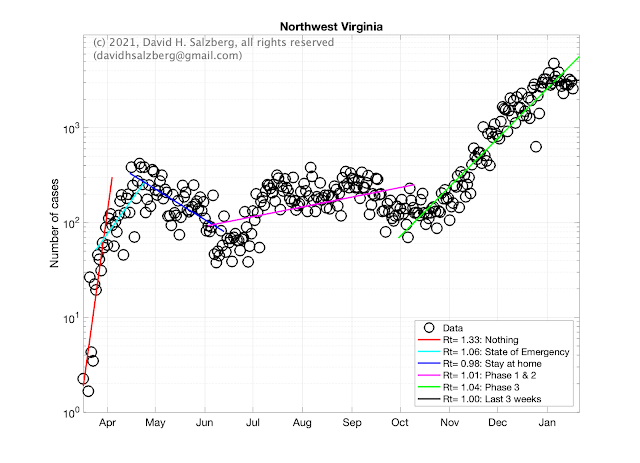 After the early peak in May (~1,000 cases per day), NOVA saw a sharp drop in all COVID metrics, reaching a broad valley in mid-June (~200 cases/day), which lasted until around August 1st.  By Sept 1, NOVA increased to 300 but the caseload dropped to about 150 by late in the month. Since then we have had a steady increase averaging up to a current value of 1628/cases per day. 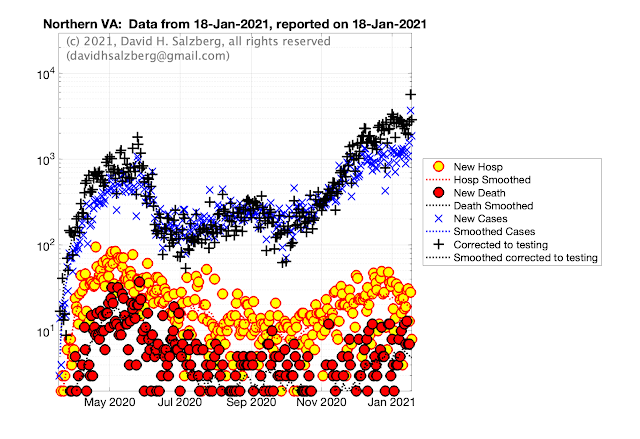 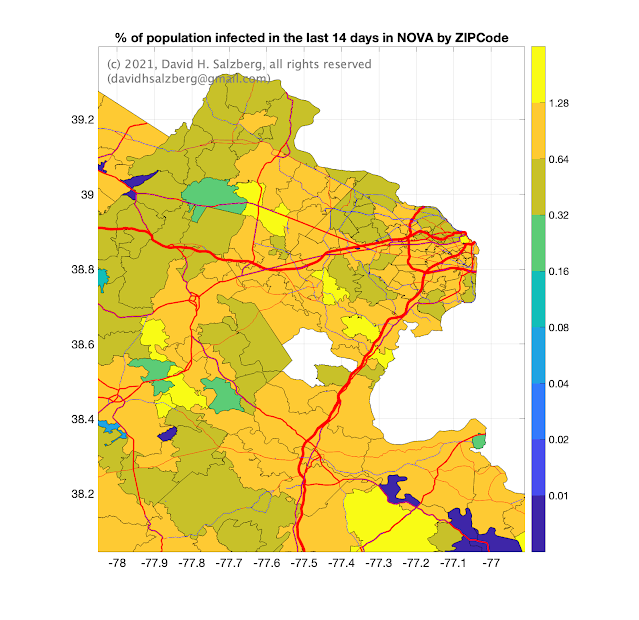 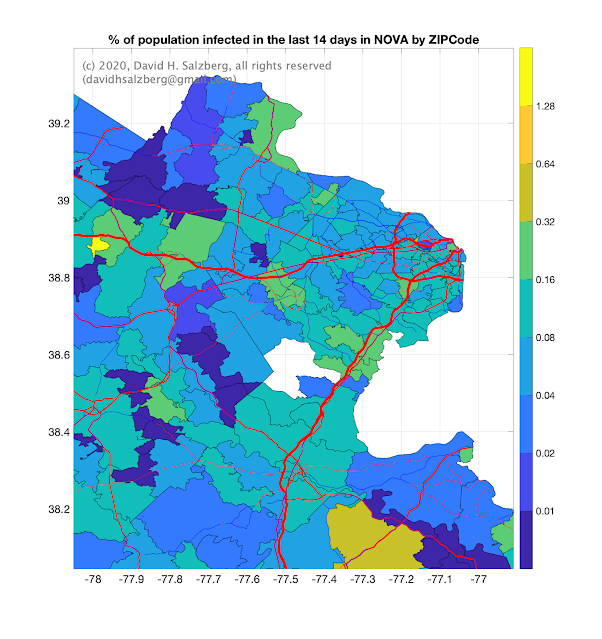 Most localities in NOVA have case counts near or above 40/100K/day which is a dramatic increase since the fall.   In Vienna, for example, we were under five in late September but are now at 53.7/100K/day. 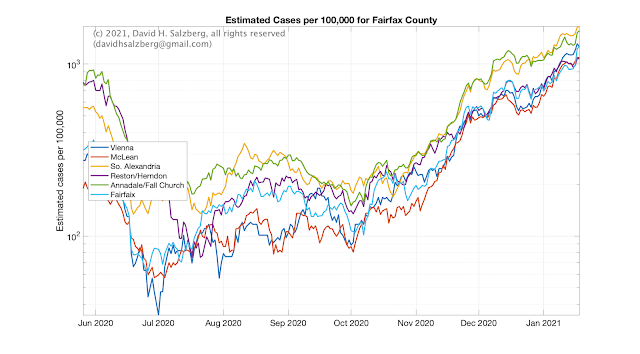 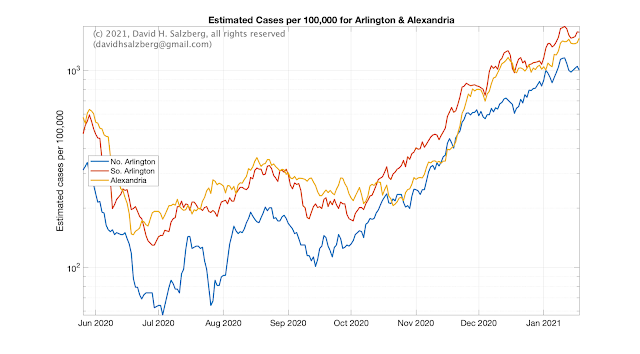 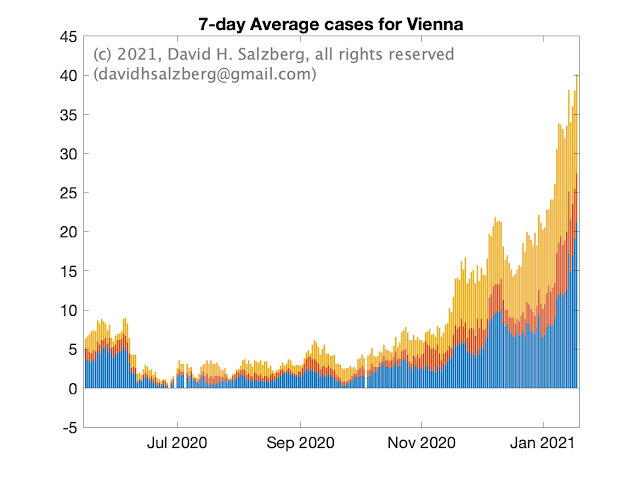 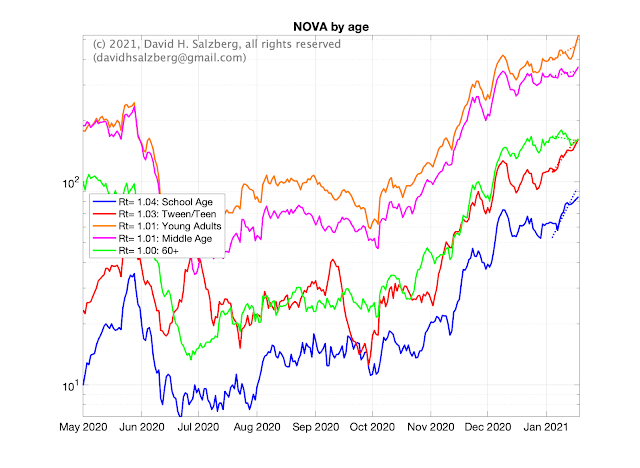 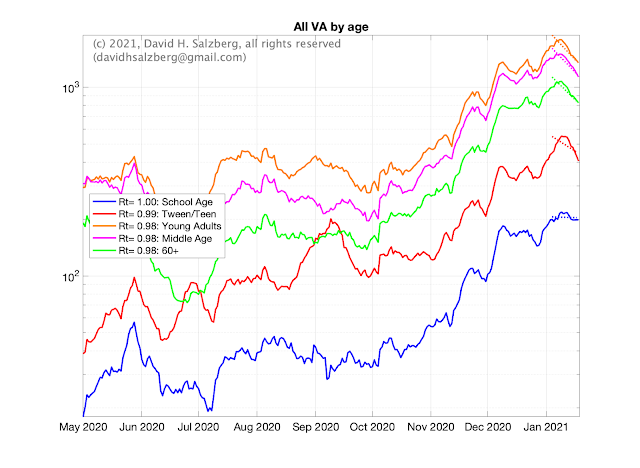