One modification:  I now am counting antigen and PCR testing together, as VA is reporting the data in a way that allows it.

If you work for leidos and find this useful, please vote for me for a people’s choice achievement award.

Big picture: I have been afraid to post because whenever I post a trend, the trend ends.  The trend is a reduction in the caseload.  All metrics are point in the right direction: caseload, hospitalizations, and % positive.  This probably reflects the end of a spike because of the holiday possibly coupled with the impact of vaccinations (4-5% have been vaccinated which should reduce the number of new cases by a similar percentage, though our drop is much bigger than 4-5 %.

Since I last reported, Virginia’s caseload has remained mostly below 5000 (yesterday we were higher with just over 6000 cases. Today’s count close just below the three-week bias-adjusted average of 5,139 cases

The current weekly total of 32,250 new cases (down from 43,129 the prior week).  This works out to 4,607 cases per day, which works out to 55.2 cases/day/100K people. This is down significant from the last several weeks.  The hospitalizations are decreasing, down to about 2850 cases. We continue to have capacity for 3000 more COVID cases in Virginia Hospitals, or about double the current numbers of COVID patients, and we will not exceed that for at least a month at current growth rates.

The trends over the last three weeks now are showing an DECREASE at 0.3% per day or2.2% per week.

The testing numbers now show the percent positive to be about 3x the 5% metric over the last week (% positive at 12.1%).  The 5% metric is often used to indicate sufficient testing. This is concerning because, as the percent positive increases, it is possible that some cases are being missed as the number of positives is constrained by the testing availability.  VA is tested about 1.5% of the population in the last week, down from 2.9% in the week prior to thanksgiving.  Factoring in the test rates and the percent positive, it would not surprise me to find out we are missing between 50% & 80% of the case

When we look at the local ZIP code data, we see that the observed increases are almost universal across VA. I am comparing the current estimated % positive to that of one month ago. Note that almost all is a warmer color (further from blue and closer to yellow). This is an indication of the uniformity of the increase. As a practical matter, it means to be safe and careful, no matter where in VA you live, there is risk -- lower than a week or two ago, but higher much higher in October.

In the spring, COVID-19 in VA was primarily a concern in the DC suburbs. Over three to four weeks, (from late May to early June), NOVA recovered and for about a month the disease was under control to the point that restrictions were eased. Unfortunately, in eastern VA/Hampton Roads, the easing of restrictions resulted in a surge in cases which peaked just before August 1st resulting in stricter restrictions in that area. Since then, with the exception of growth on college campuses, the disease has been stable, excluding the rural parts of the state where safeguards (social distancing and masks) are largely ignored. Starting in October our weekly case count has been increasing throughout the Commonwealth, particularly in NOVA and SWVA, and NWVA.  The numbers continued to rise until reaching a peak in mid Jan.  Now, hopefully, we are showing a decline. 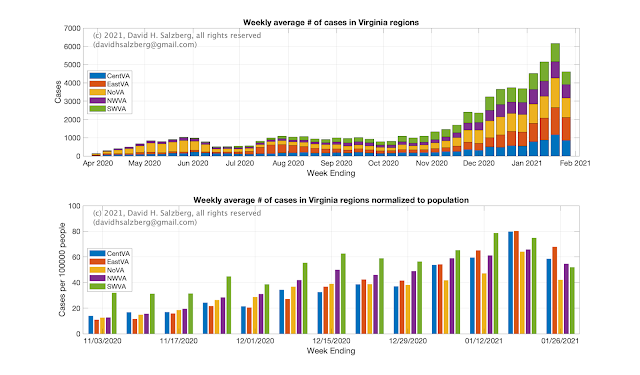 The entire state is increasing with Rt= 0.985 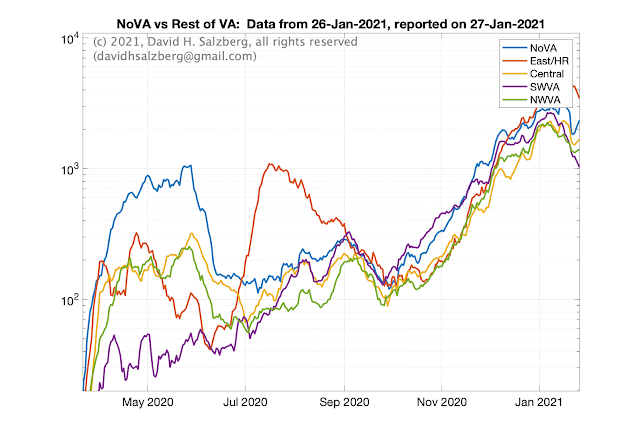 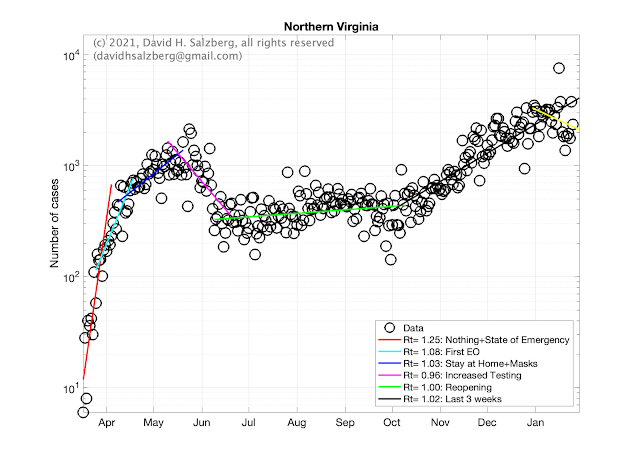 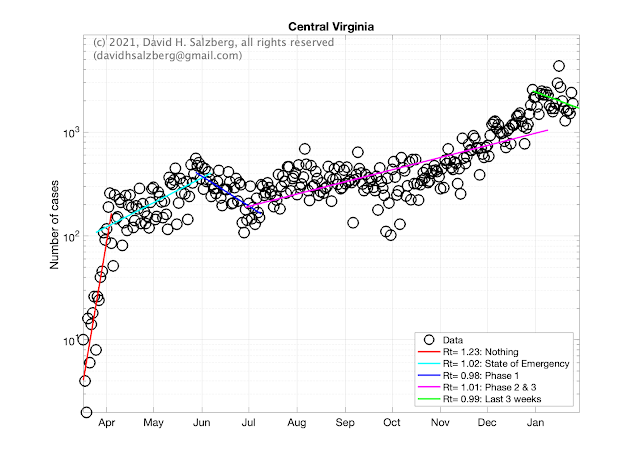 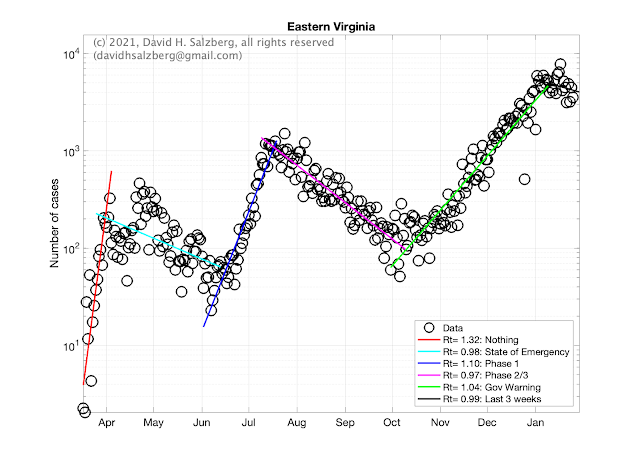 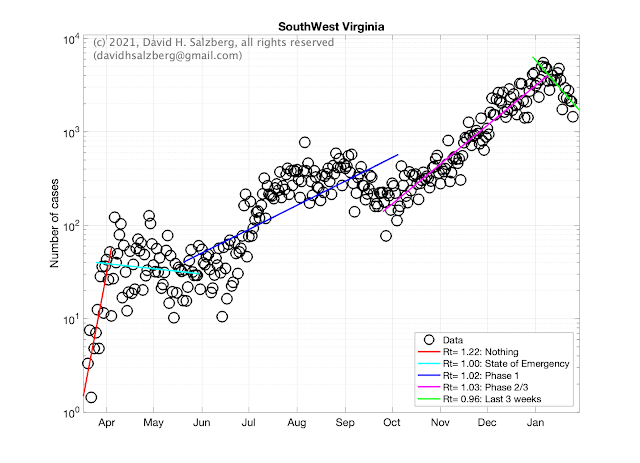 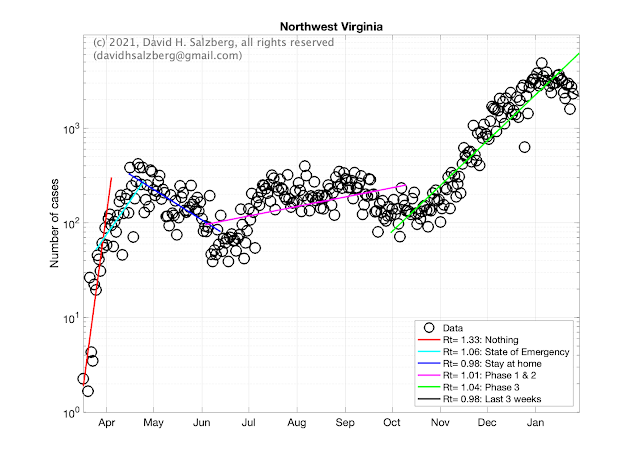 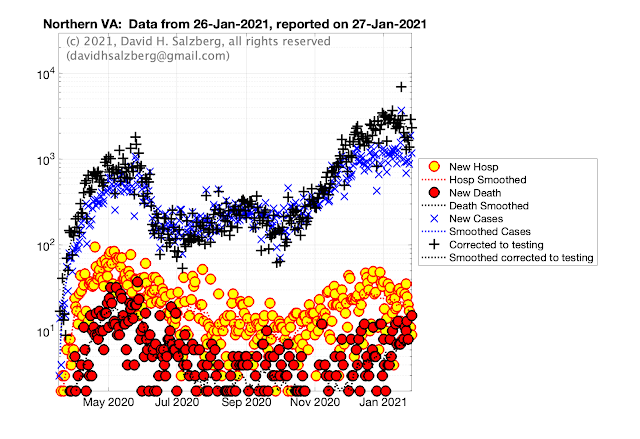 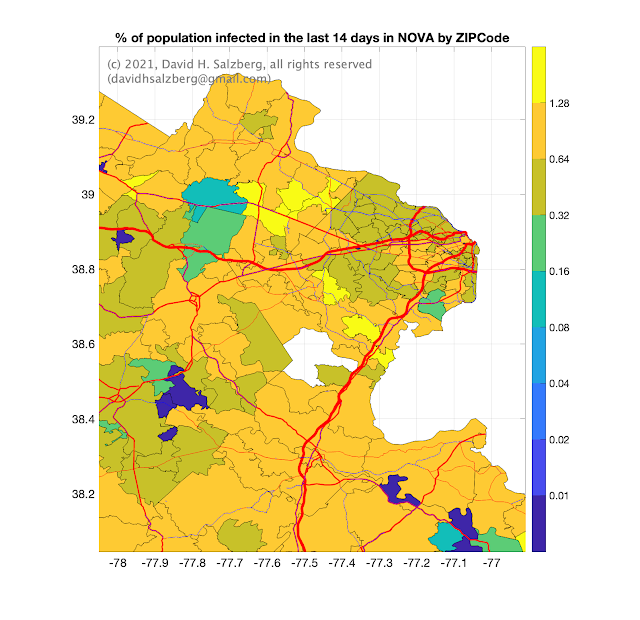 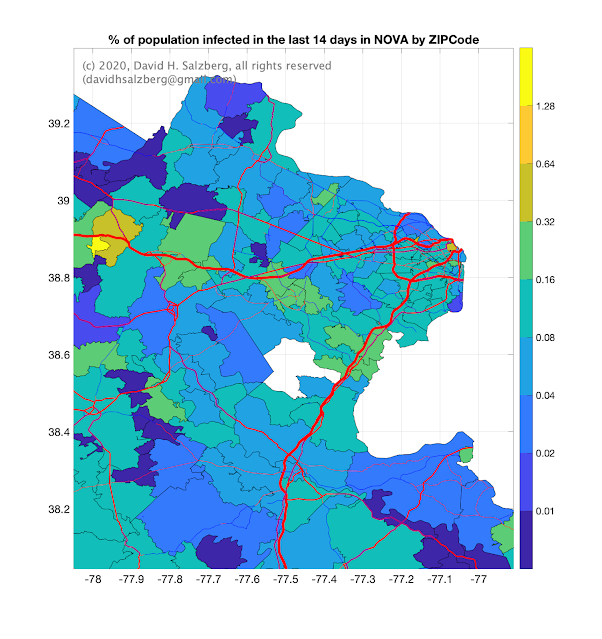 Most localities in NOVA have case counts near or above 30-50/100K/day which is a dramatic increase since the fall.   In Vienna, for example, we were under five in late September but are now at 34.5/100K/day. 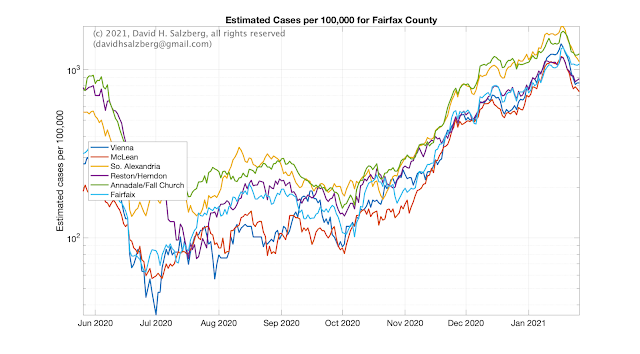 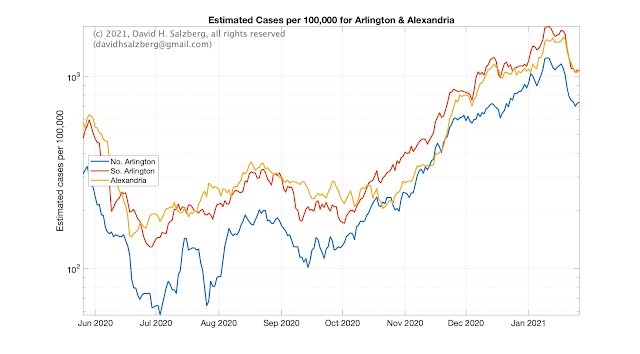 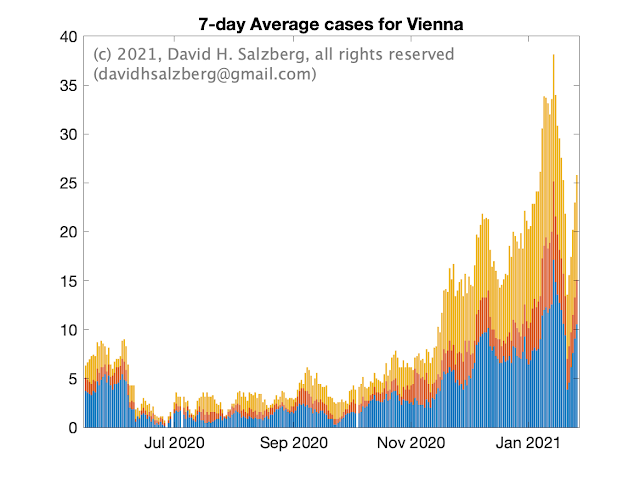 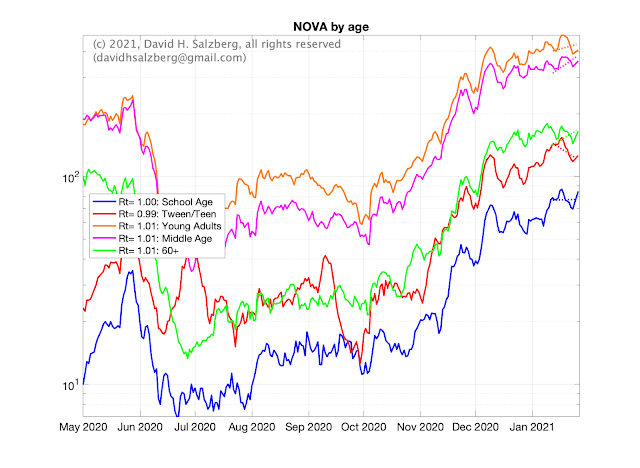 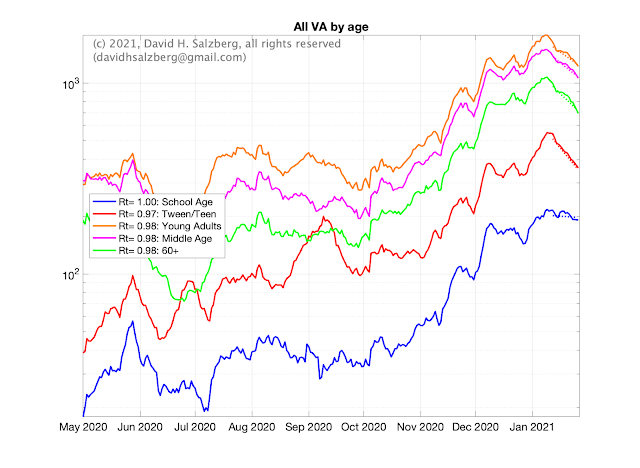 Colleges are restarting; I will be working on a new approach for colleges. However, if you are interested in a specific college, most now have good dashboards, and that is probably a better source of data than my broader surveillance.  (That was not the case in Aug - Oct 2020 when the outbreaks at many campuses occurred).