Big picture: The daily case count continues to decrease from the mid-January peak. While the daily counts have increased slightly but the weekly trends continue to show a significant improvement over prior week.  The number of patients continues to decrease from the peak, and the % of tests that are positive are down to around 11%.  I expect what has happened is the Dec – Jan increase was the results of people traveling for the holidays.  My expectations are that any further decrease will be a reflection of the number of non-immune people decrease due to the vaccination efforts.

The current weekly total of 23,955 new cases, or 3,422 cases per day, which works out to 41.0 cases/day/100K people.  This is the lowest weekly total since right after thanksgiving (when we were seeing low numbers because of low testing over the long holiday weekend).    The number hospitalized is down to 2370, down 800 from the mid-January peak.  We continue to have capacity for 3000 more COVID cases in Virginia Hospitals, or about double the current numbers of COVID patients, and we will not exceed that in the near future.

The trends over the last three weeks now are showing a decrease at 3.2% per day or 20% per week.

The testing numbers now show the percent positive to be about 3x the 5% metric over the last week (% positive 11.1%).  The 5% metric is often used to indicate sufficient testing. This is concerning because, as the percent positive increases, it is possible that some cases are being missed as the number of positives is constrained by the testing availability.  VA is tested about 2.2% of the population in the last week, down from 2.9% in the week prior to thanksgiving.

Virginia is continuing to vaccinate group 1b; currently 780,000 or so Virginians have received the first dose, and 340,000 have received both doses.  This suggests that about 9% of the population have growing immunity, and 4% have nearly full immunity.  Most importantly, this group includes nearly all of the health care workers, mitigating the risk of a surge knocking out medical care.  As the numbers vaccinated increase, the number of cases should drop. With that said, there are reports out of South Africa that having a prior COVID exposure does not provide immunity to the new South African strain.  The vaccines, though appear to remain effective.  This means that our only chance for herd immunity is from the vaccine. 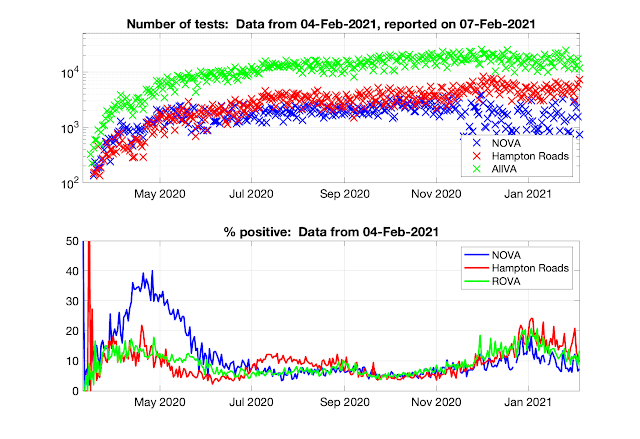 In the spring, COVID-19 in VA was primarily a concern in the DC suburbs. Over three to four weeks, (from late May to early June), NOVA recovered and for about a month the disease was under control to the point that restrictions were eased. Unfortunately, in eastern VA/Hampton Roads, the easing of restrictions resulted in a surge in cases which peaked just before August 1st resulting in stricter restrictions in that area. Since then, with the exception of growth on college campuses, the disease has been stable, excluding the rural parts of the state where safeguards (social distancing and masks) are largely ignored. Starting in October our weekly case count has been increasing throughout the Commonwealth, peaking in mid January, followed by a steep decline. 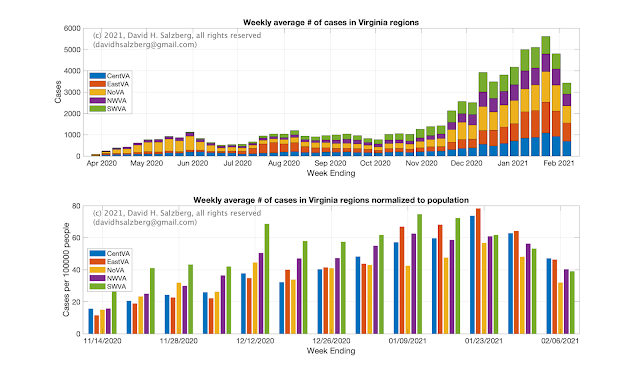 The entire state is increasing with Rt=0.9685

Also, I am aware that there is a glitch in the labels, and for some of the following charts, the final line is not included in the label. 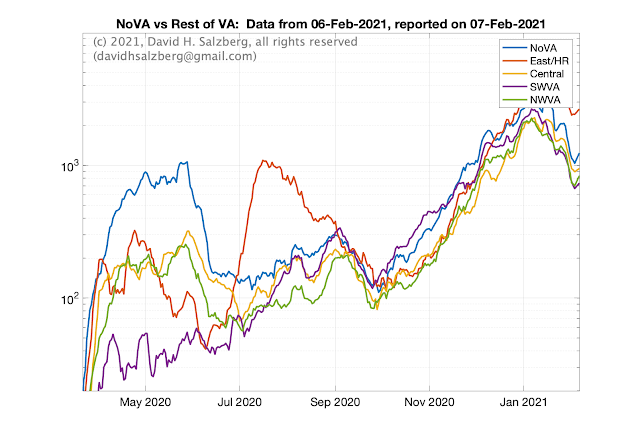 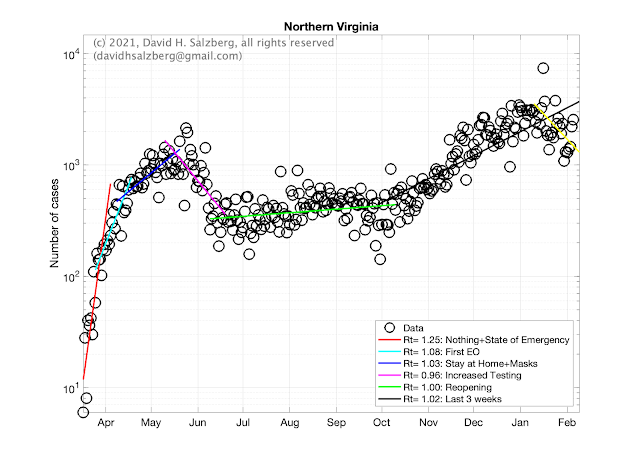 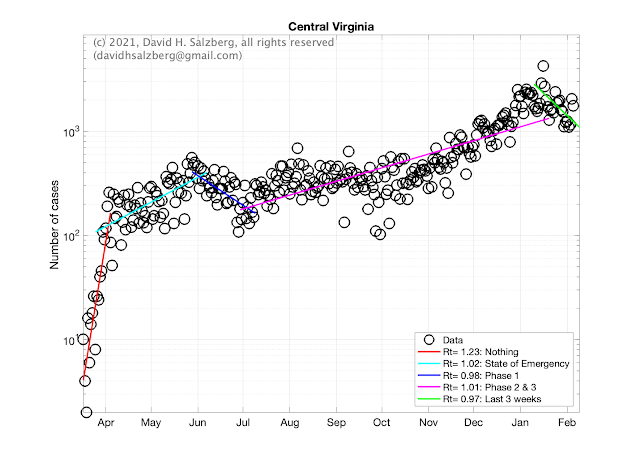 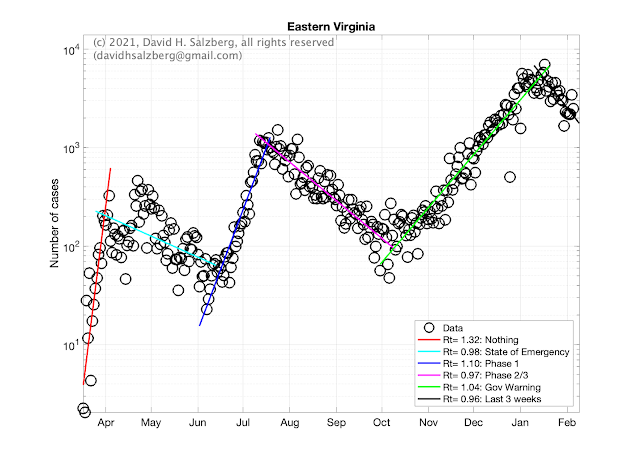 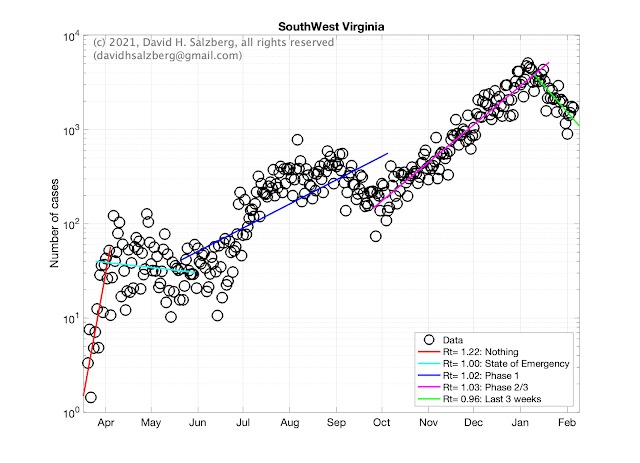 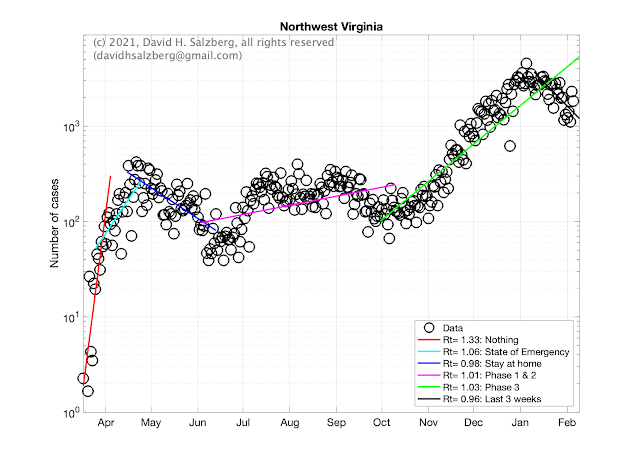 After the early peak in May (~1,000 cases per day), NOVA saw a sharp drop in all COVID metrics, reaching a broad valley in mid-June (~200 cases/day), which lasted until around August 1st.  By Sept 1, NOVA increased to 300 but the caseload dropped to about 150 by late in the month. Since then we have had a steady increase averaging up to a a peak of 1500 cases per day before declining to current value of 807/cases per day. 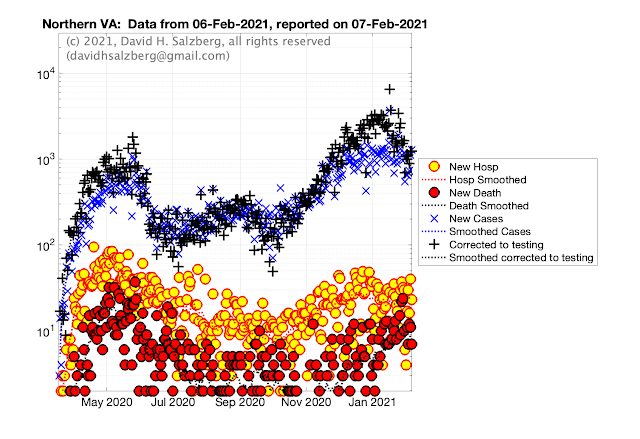 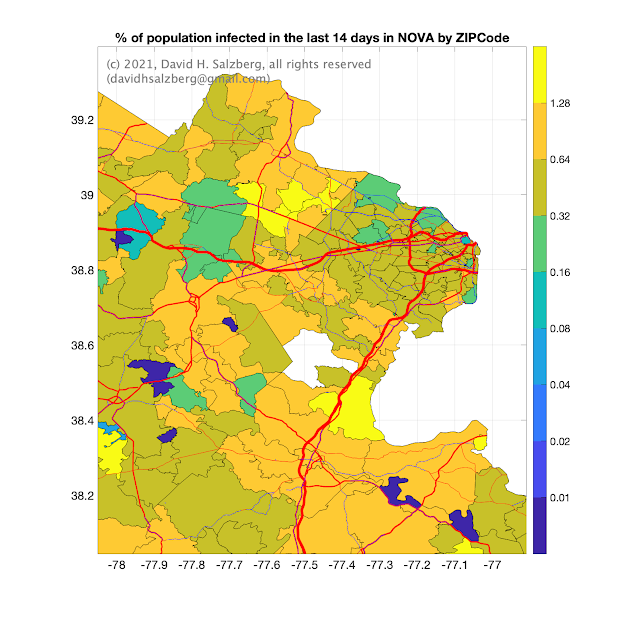 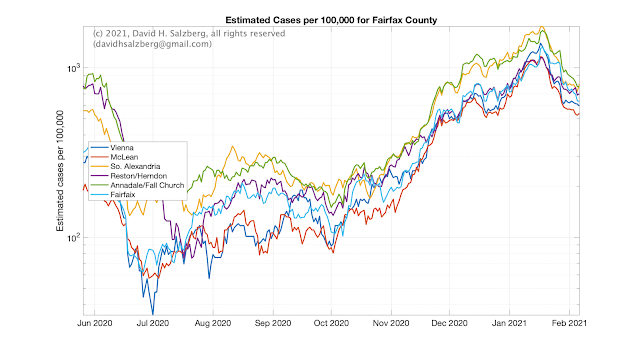 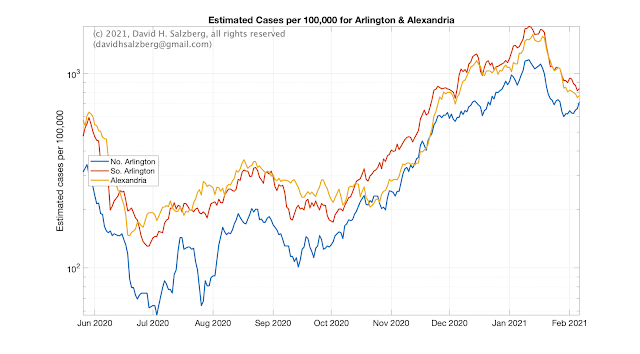 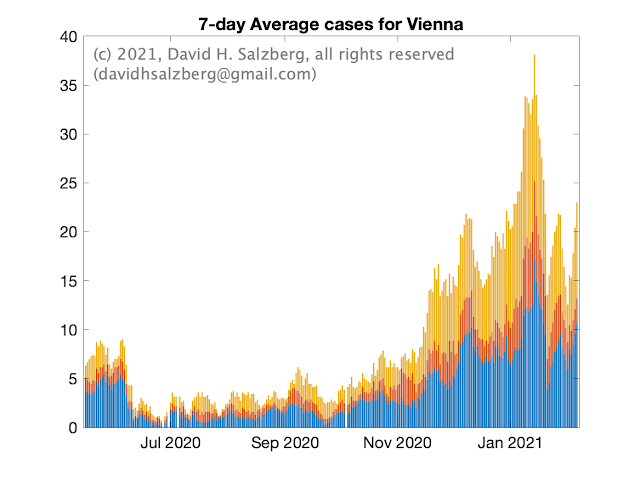 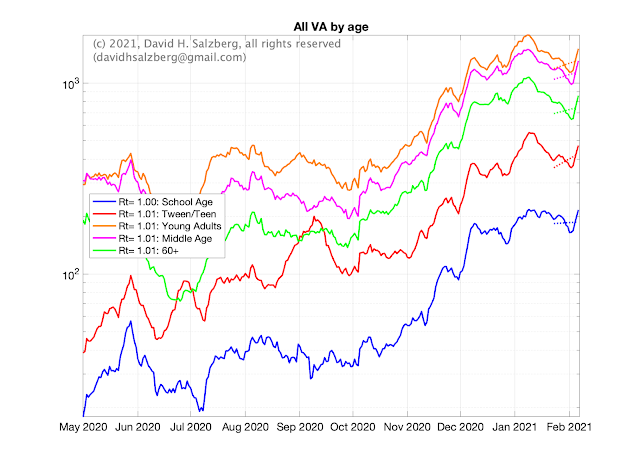 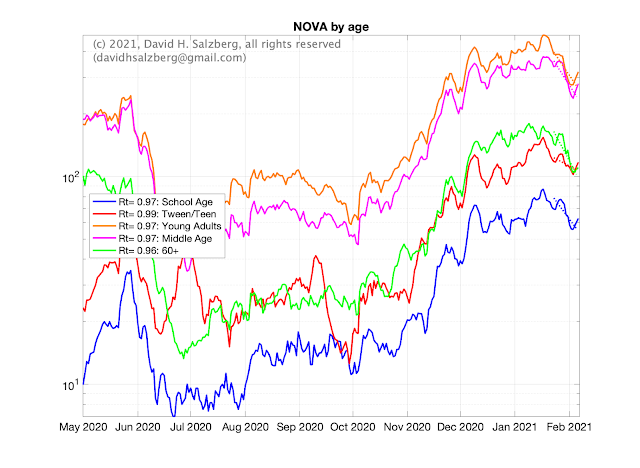 I am no longer reporting on colleges in detail, as the college dashboards largely improved over the fall semester, and I think they are sufficient for reporting at this time.  In general, the readers are interested in the one or two specific colleges.  Googling “WM COVID Dashboard” for example will give the William & Mary COVID-19 dashboard, which has information more current than is available through other means.

With that said, the tends show increase in cases in all of the jurisdictions with colleges. 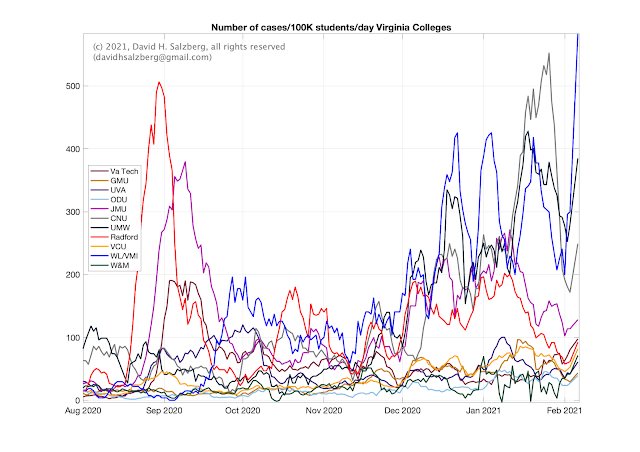 1) You can repost/ share this information in its entirety by forwarding the entire link, or, 2) If you want to share partial content, you must receive my permission. This is proprietary information and I need to make sure you understand what I am saying. If anyone sees that this work being used without attribution, please let me know as soon as possible. I am willing to have an informed discussion/debate on my approach, but I want to make sure the proper context is captured.